Essay Contest: Religious Freedom in Southeast Asia and the West

Poster, ready to be printed in A3 size.

Essay Guidelines must read before submission.

Religious Freedom in Southeast Asia and the West

Essays will be evaluated by a panel of five experts chosen by the Institute for Global Engagement, in consultation with ‘Institut Leimena’. Submitted essays will be judged on both content and style. In order to be competitive an essay must focus directly on the essay contest topic, and be clear, engaging, logically organized, and cogently argued.

Dennis R. Hoover is Vice President for Research and Publications at the Institute for Global Engagement (IGE). He is also Editor of IGE’s quarterly journal, The Review of Faith & International Affairs (www.tandfonline.com/rfia), published by Routledge. He holds M.Phil. and D.Phil. degrees in political science from the University of Oxford. He is editor of Religion and American Exceptionalism (Routledge 2014), co-editor with Chris Seiple and Pauletta Otis of The Handbook of Religion and Security (Routledge 2013), co-editor with Douglas Johnston of Religion and Foreign Affairs: Essential Readings (Baylor University Press 2012), and co-editor with Robert A. Seiple of Religion and Security: The New Nexus in International Relations (Rowman & Littlefield 2004). He has also authored numerous book chapters, articles in peer-reviewed journals, and magazine articles and op-eds.

Eugene Tan is Associate Professor of Law and Co-Director of the Centre for Scholars’ Development, Singapore Management University. He holds a JSM from Stanford University and a MSc in comparative politics from the London School of Economics. He has also served as a Nominated Member of Parliament in Singapore’s legislature. His areas of research include constitutional and administrative law, corruption and public ethics, nationalism and ethnicity, the ASEAN Charter, religion and politics, and immigration. He is the author of many publications, including “Faith, Freedom, and U.S. Foreign Policy: Avoiding the Proverbial Clash of Civilizations in Southeast Asia,” The Review of Faith & International Affairs 11(1): 76-78.

Jakob Tobing is the President of the Institut Leimena. He is a prominent architect of Indonesia’s democracy who played a leading role in ending the three-decade authoritarian regime in 1998. He chaired the first National Election Committee in 1999, and then between 1999 and 2004 led the landmark Constitutional Amendments that laid the foundation for the new democracy and rule of law, with a strong emphasis on human rights protection. Now many countries consider Indonesia’s Constitution as a model. For his exceptional service, Indonesia’s President presented to him the highest civilian award, Mahaputra Medal. After more than three decades as member of parliament, he was appointed as the Ambassador to the Republic of Korea in 2004. His outstanding diplomatic contribution earned him the Gwanghwa medal—the highest diplomatic award from the Republic of Korea. He holds M.P.A. degree from Harvard University.

Paul Marshall is a Senior Fellow at the Institut Leimena and the Center for Religious Freedom at Hudson Institute. He is also a Distinguished Senior Fellow at Baylor University and Visiting Professor at the Graduate School of Jakarta State Islamic University. He has spoken on religious freedom and international relations before hearings by the US Senate and House of Representative, US State Department, and Helsinki Commission.  He is the author and editor of more than twenty books on religion and politics, especially religious freedom, including Persecuted: The Global Assault on Christians (2013, with Lela Gilbert and Nina Shea), Silenced How Apostasy and Blasphemy Codes Are Choking Freedom Worldwide (2011, with Nina Shea) and Religious Freedom in the World (2007). He has published or been the subject of articles in the New York Times, Wall St. Journal, Washington Post, Los Angeles Times, Washington Times, and many other newspapers and magazines.

Robert Joustra is an Assistant Professor of International Studies at Redeemer University College (greater-Toronto-area, Canada). He is also an editorial fellow with The Review of Faith & International Affairs, and a fellow with the Center for Public Justice. He holds a Ph.D. in international politics at the University of Bath Before joining Redeemer, Joustra taught English in Kobe (Japan), and worked for nearly a decade for the think tank Cardus on issues ranging from urban planning, to education diversity, to religious freedom. During that time he edited the policy journal of Cardus and its worldview journal, Comment magazine. He is editor, with Jonathan Chaplin, of God and Global Order: The Power of Religion in American Foreign Policy (Baylor University Press, 2010), and is working on two books: the first on religious freedom in Canadian foreign policy, the second on Charles Taylor and the apocalyptic imagination in pop culture.

Please forward all your questions and inquiries to belicias@leimena.org 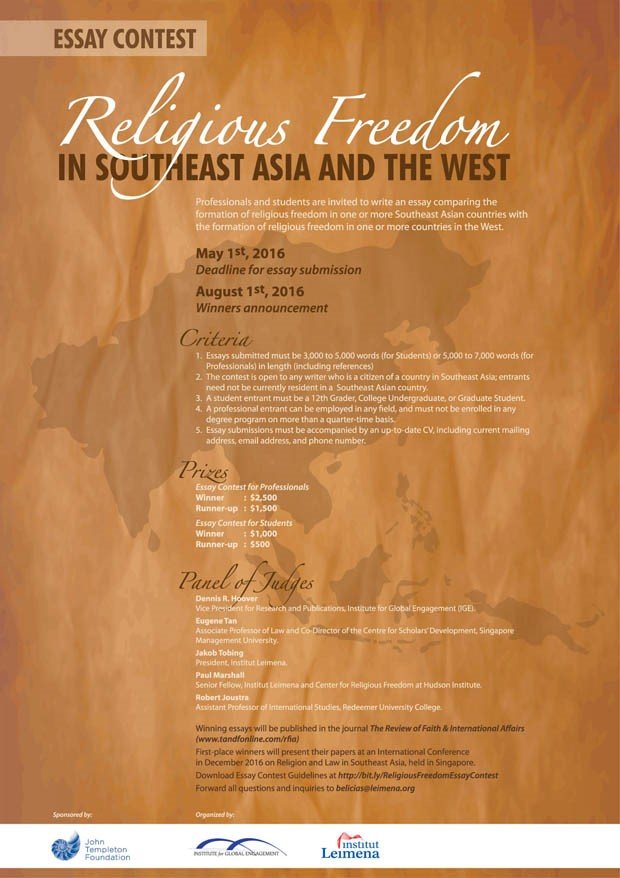