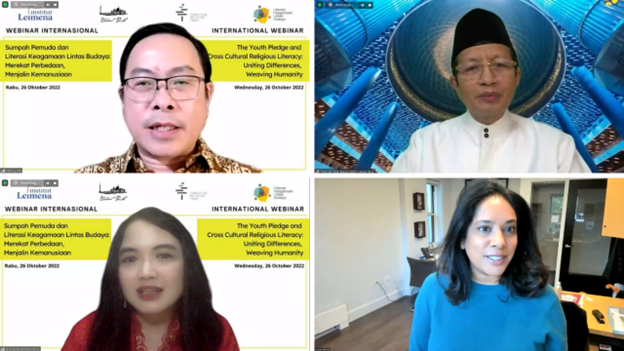 Jakarta – The Youth Pledge which is commemorated every October 28 is a testament to the genius and magnanimity of the Indonesian youth in prioritizing unity. Instead of being trapped by the divide et impera colonial tactic, youths from various ethnic groups, races and religions took the initiative to pledge unity at the Youth Congress on October 28, 1928 in Batavia (old name of Jakarta).

“This is the genius of the vision and the magnanimity of the young men and women who gathered at the 1928 Youth Congress. Meanwhile, the elite leadership were more senior but were often trapped in identity politics and narrow interests,” said Executive Director of Leimena Institute, Matius Ho, in an international webinar entitled “The Youth Pledge and Cross Cultural Religious Literacy: Uniting Differences, Weaving Humanity”, Wednesday night (10/26/2022).

The said international webinar was hosted by Istiqlal Mosque and Leimena Institute and supported by the Templeton Religion Trust. At least 1,300 participants attended.

Matius stated that the Youth Pledge was an important milestone for Indonesia’s independence. However, it is recognized that Indonesia’s pluralism can be an asset as well as a potential for polarization and division that can become serious.

“Identity politics in Indonesia is not new, but it is like a disease that increasingly develops during certain seasons, one of which is when there are big political agendas. At present, we are in the midst of facing the ripples of the legislative and presidential elections in 2024,” he declared.

Meanwhile, the Grand Imam of Istiqlal Mosque, Prof. Dr. Nasaruddin Umar, said the Youth Pledge was not birthed in a vacuum. The agreement of the Indonesian youth to unite is the embodiment of Indonesia’s maritime culture, as conveyed by a French historian, Denys Lombard,  who researched on Indonesian culture.

Nasaruddin explained that the maritime community had a shared ownership philosophy for three things, namely coasts, rivers (fresh water), and fire. No single group/ethnicity had the right to monopolize these three, so that it was not surprising when Indonesia became a “Silk Road”, that is, an ancient international trade route of the Chinese civilization.

“This was the reason why the Youth Pledge turned out easy because the foundational culture was maritime culture with the philosophy of coasts, rivers and fire as the unifier of the nation,” Nasaruddin stated.

Indonesia as a maritime country adhered to the concept of open nationalism which did not merge foreign ideologies or values including religion into one; instead, it elaborated on these values.

“Pancasila emerged not as a religion, but a distinction of the Indonesian nation that was able to frame existing differences into a frame of Indonesianness under the Unitary State of the Republic of Indonesia,” said Nasaruddin.

Gracia Paramitha, Ph.D., in her presentation stated that the 1928 Youth Pledge became the inspiration for young people to declare the Youth Pledge 2.0 in Bandung in 2012.

G20 Analyst and Co-founder of Indonesian Youth Diplomacy (IYD), Gracia Paramitha, Ph.D., said that the younger generation in the contemporary and global Indonesian context has a big role to play in bringing out the spirit of the Youth Pledge to inspire modern development. According to her, the technology era can trigger the creativity of the youth to make innovations and new breakthroughs.

However, Gracia reminded young people to be vigilant against contemporary threats such as stereotyping, excessive desire to show off identity, and massive disinformation.

“The real meaning of the Youth Pledge is unity, meaning that before upholding self-identity, we also need to uphold togetherness. The Spirit of togetherness is how we collectively put aside our ego, our identity, and manage our differences,” declared Gracia, who is also the initiator of the Y20 Awards 2022. 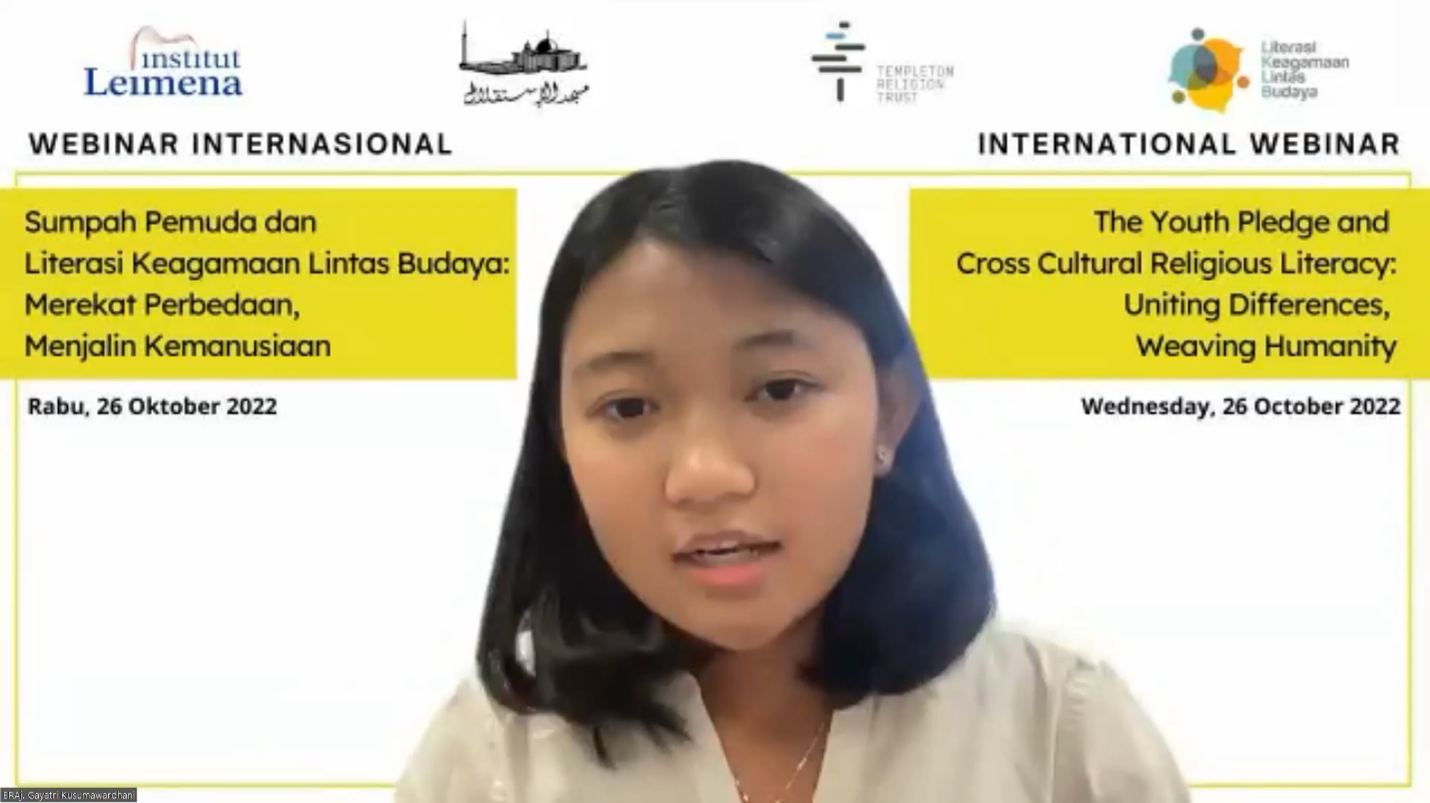 Learning the Meaning of Tolerance

Reflecting on Youth Pledge Day, BRAj. Gayatri Kusumawardhani, a young achiever who is a Y20 Awards 2022 Finalist, said that the spirit of unity should always be prioritized in the midst of Indonesia’s pluralism.

Gayatri is at present the Student Organization Chair of Regina Pacis Senior High School Surakarta and is currently in the United States as a scholarship recipient of the Kennedy-Lugar Youth Exchange and Study (YES) Program. She said that her experience as a minority and even as a “Muslim leader” in a Catholic school gave her valuable lessons in looking at other people’s point of view and in valuing diversity very highly.

Gayatri comes from the environment of the Keraton (Palace) Solo, which is strongly bound to palace culture, but her family always espouses the values of openness.

“As a Muslim, in my experience of nearly a year as the Student Organization Chair in a Catholic school, I really learned what it means to understand and what tolerance means,” she stated.

Gayatri along with the rest of the Student Organization leaders of Regina Pacis Senior High School Surakarta had initiated the establishment of the roadside library named Rumah Baca Nawala since September 2021 in the courtyard of Surakarta City Hall. The said project, which was selected as a Y20 Awards 2022 finalist, is a new program in the Y20 2022 Indonesian Presidency.

“Being a leader with a Muslim identity in a Catholic school, I learned that unity is our strength and diversity is our power, also known as Bhinneka Tunggal Ika,” she added.

Executive Director of the Institute of Politics at the University of Chicago, Zeenat Rahman, said her experiences of working in the government, in non-profit organizations and in the academia show the importance of skills to navigate differences and be literate about other people who are different from us. Zeenat, who has visited Indonesia three times, admitted that she was amazed by the beauty of Indonesia’s cultural diversity that has merged into one pluralistic democracy.

The former special adviser on global youth affairs for two US Secretary of State, Hillary Clinton and John Kerry, added that in her experience of educating the youth, CCRL tools are needed to shape public and political leaders.

“For me, CCRL is a practical skill. It’s not about trying to convince people to convert, for example, to Islam, but how we can interact with respect and work together in our society,” Zeenat stated. 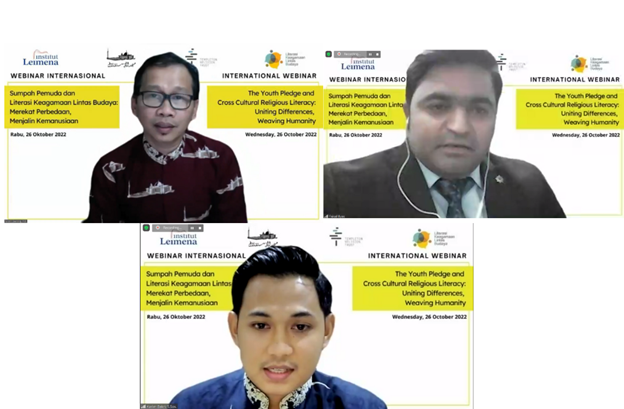 Head of Education and Training at Istiqlal Mosque, Dr. Faried F. Saenong, added that the three core values in the Youth Pledge are inclusiveness, connectivity, and counter colonialism. (IL/Chr)