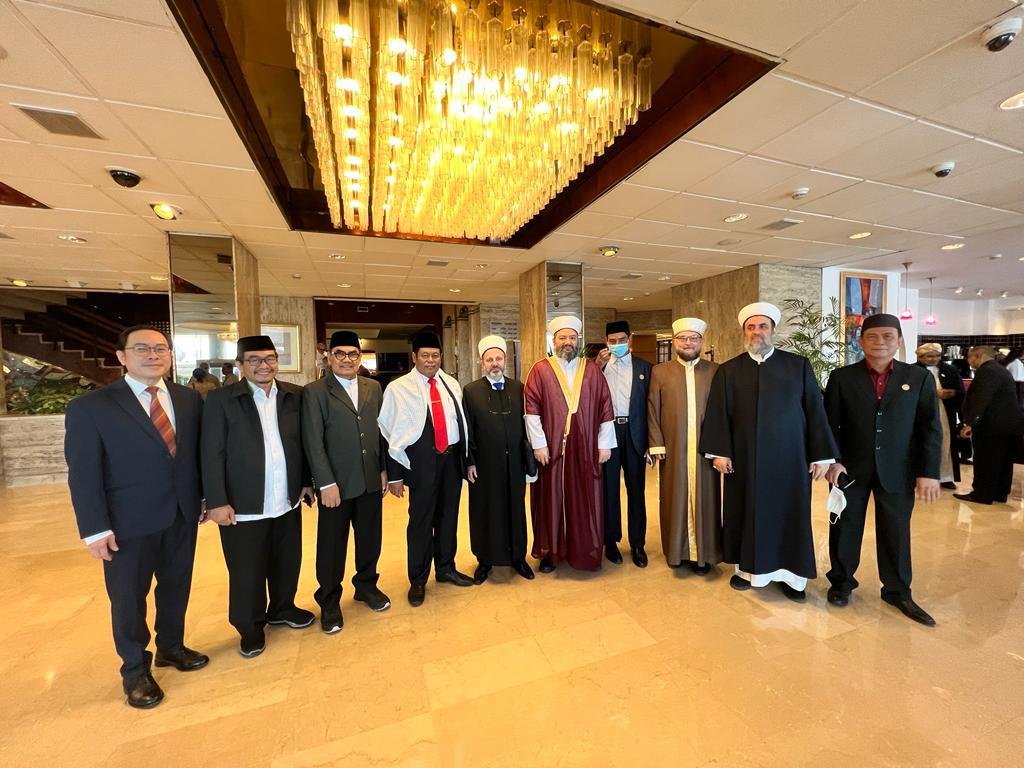 The Indonesian delegates along with other invitees at the International Fatwa Conference in Cairo, Egypt, October 17-18, 2022.

Jakarta – Executive Director of Leimena Institute, Matius Ho, along with the Rector of Indonesian Muslim University (UMI, for its acronym in Indonesian), Prof. Dr. Basri Modding, and Vice Rector UMI, Dr. Ishaq Shamad, attended the International Fatwa Conference held in Cairo, Egypt, on October 17-18, 2022, as delegates from Indonesia. The event was organized by the Egyptian fatwa institution, Dar al-Ifta, as its 7th international conference, which this time around specifically collaborated with the General Secretariat for Fatwa Authorities Worldwide (GSFAW).

The attendance of Leimena Institute and UMI cannot be separated from the support of the International Advisor for the Cross Cultural Religious Literacy (CCRL) Program, Dr. Ali Rashid Al Nuaimi, the founder and chairman of The World Muslim Communities Council (TWMCC) in Abu Dhabi, United Arab Emirates.

“This international conference under the auspices of Egyptian President Abdel Fattah El-Sisi is a direct invitation from the Grand Mufti of Egypt, Dr. Shawki Ibrahim Allam, to discuss topics that are very important to the world and relevant to the development of the CCRL program which is being carried out by Leimena Institute and its partners in Indonesia,” Matius stated.

In attendance were muftis and scholars from 90 countries including other Indonesian delegates, such as the Vice Chairperson of Indonesian Ulama Council, K.H. Marsudi Syuhud, as well as representatives from the United Nations (UN) and the World Health Organization (WHO).

“In November 2022, Egypt also hosted COP27, which is the United Nations conference on climate change issues. So, this fatwa conference is deemed as part of the preparations for COP27,” Matius continued. 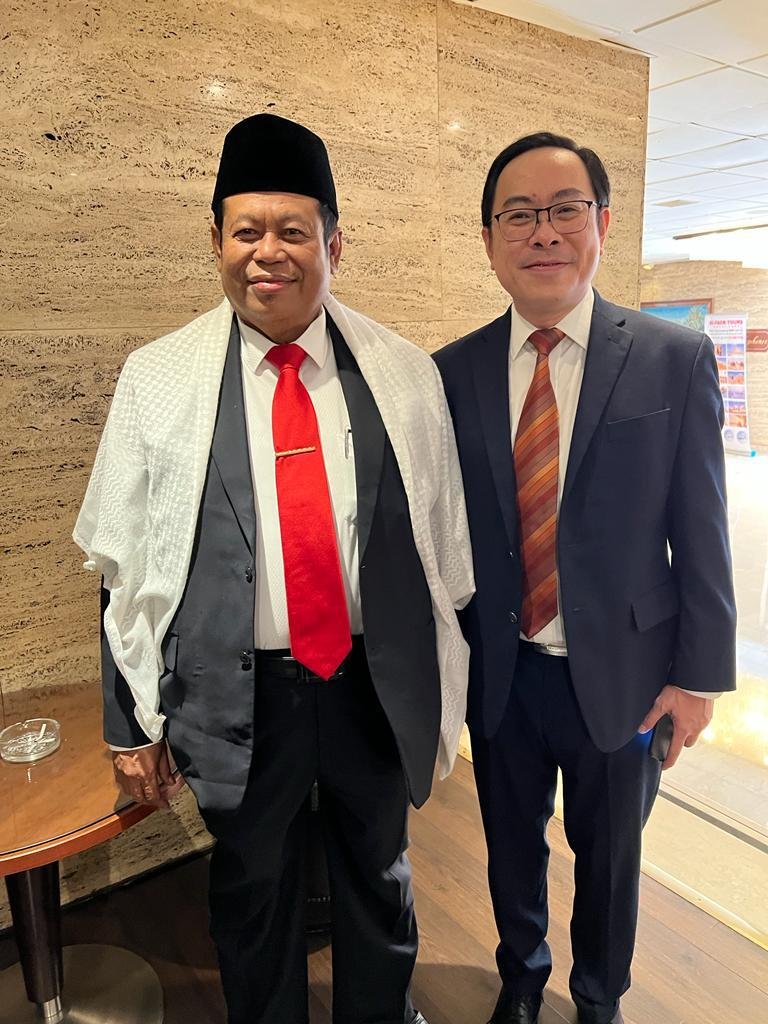 Matius explained that the International Fatwa Conference engaged participants to understand the development of fatwas in the world in support of the SDGs set by the United Nations. The SDGs particularly related to climate change are a common challenge for humanity and so the formulation of fatwas that support them is crucial and relevant for Muslims. This is also in line with CCRL’s emphasis on knowing people of different religions and being able to work together while  respecting each other’s differences. 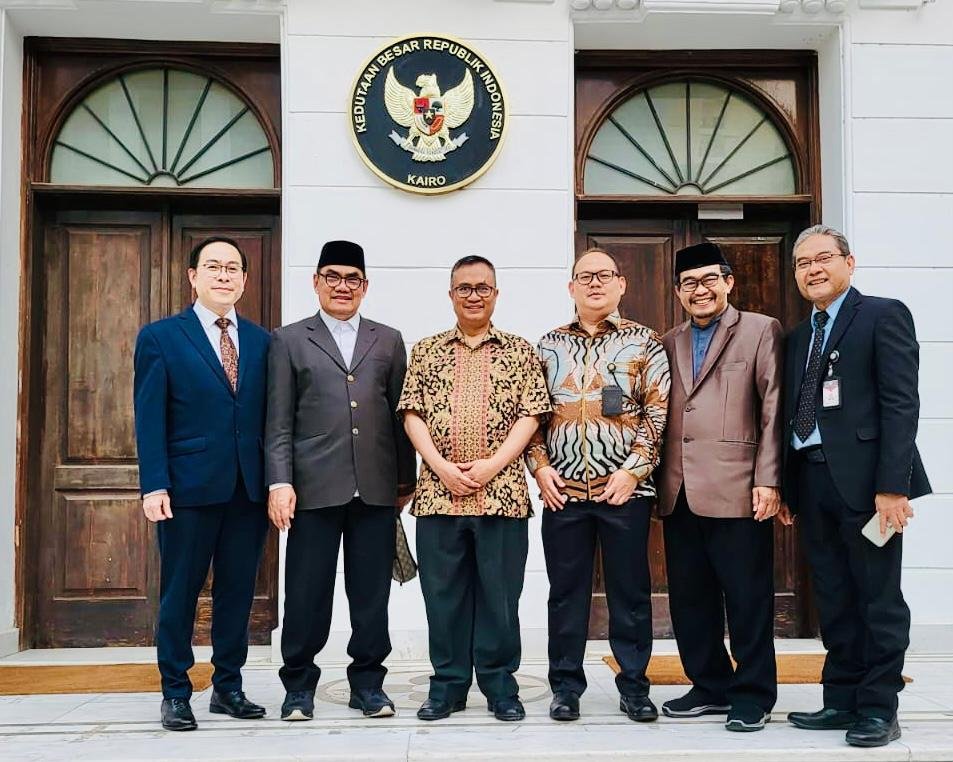 A visit to the Republic of Indonesia Embassy in Cairo, Egypt.

A Visit to the Republic of Indonesia Embassy

Apart from participating in the International Fatwa Conference series, Matius together with UMI Rector Prof. Basri Modding and UMI Vice Rector Ishaq Shamad also paid a visit to the Republic of Indonesia Embassy in Cairo on October 18, 2022. In their visit to the said embassy, they were received by the Education Attaché, Prof. Bambang Suryadi.

Prof. Bambang hopes that UMI and Leimena Institute can establish cooperation in various fields with several parties in Egypt, especially in education and culture. Regarding this, Leimena Institute, in turn, hopes that the Indonesian Embassy in Cairo will be involved in developing CCRL training which thus far has been targeting teachers/educators.

Prof. Bambang also arranged a meeting between the UMI Rector and the Rector of Al Azhar University in Cairo to be held in the Al Azhar University campus on October 19, 2022. He hopes that UMI could provide scholarships for prospective students from Egypt who wish to study there.

“Of course, they will be tested here at the Indonesian Embassy in Egypt and will attend the Indonesian Language for Foreign Speakers program,” Bambang said.