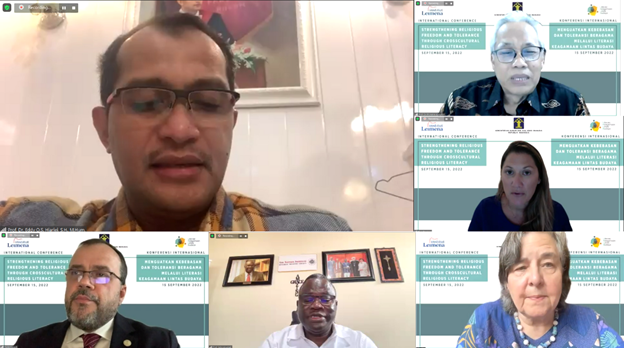 Jakarta – Indonesian Vice Minister of Law and Human Rights, Eddy O.S. Hiariej, emphasized that the concept of Cross-Cultural Religious Literacy (CCRL) is fitting to use amid the conditions of a multicultural Indonesia. Eddy said that CCRL does not reject or merge differences into homogeneity; on the contrary, it manages differences through the process of evaluation, communication, and negotiation to respond to shared opportunities and challenges in local as well as global contexts.

“In its terminology, literacy here is not talking about a form of fluency or illiterateness. But literacy in this context is how a human being has the humility to listen, observe, verify, and be involved,” stated Eddy on the third day of the International Virtual Conference which expounded on the topic “Strengthening Religious Freedom and Tolerance through Cross Cultural Religious Literacy”, Thursday night (Sept, 15).

Eddy said CCRL is neither mixing religions nor is it secularism. According to him, it is precisely through God’s omnipotence that literacy does not debase others. The foundation of CCRL is multidisciplinary, interdisciplinary, and transdisciplinary. “Listen and observe with your heart, verify with your mind and engage with your hands,” the Professor of Criminal Law at Gadjah Mada University explained.

He added the CCRL concept encourages every religious community to possess the ability to understand itself and its own religion, to know other religions or religious communities as it does itself, and the capability to cooperate with other religious adherents. He said religion can be an adhesive and a unifier, but it is not about unification. Unifier in this context is more on the attitude of tolerance as contained in religious teachings so that religious adherents can prioritize the attitude of appreciation towards diversity (pluralism).

“Another important thing that we must utilize as foundation is that we, fellow religious adherents, must know each other, not demean each other; we should avoid prejudice, not finding fault with others, and we should not ridicule each other nor gossip about each other as human beings who live side by side,” Eddy stated.

Eddy said that educators have a strategic role in developing religious and cultural literacy that is able to penetrate into the depths of the students’ understanding. “From childhood we offer an understanding of how they should understand their own religion, also other religions, which will determine the face of interreligious harmony in the future,” he continued. 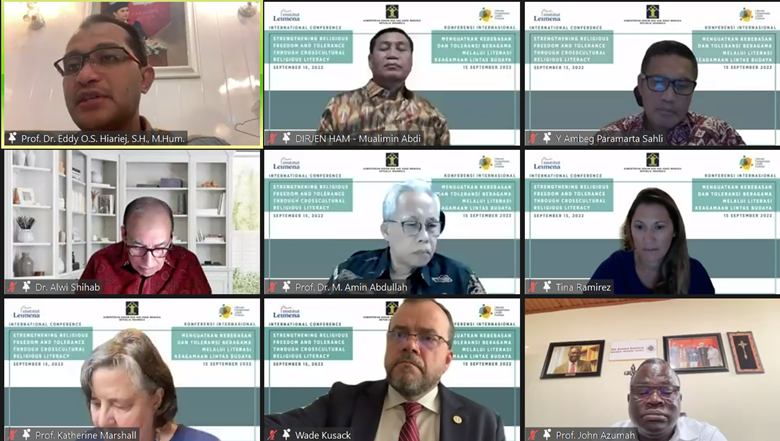 Member of the Steering Board of the Pancasila Ideology Development Agency, Amin Abdullah, said that the life of pluralism in Indonesia faces challenges because there is dissension at the level of understanding which is divided into ideological-conservative, textual-conservative, moderate, and liberal groups. However, the toughest obstacle actually arises from the level of application in the field, namely at the cultural and public awareness.

“The substance and structure of the law can be formulated through writing and law-making. However, its implementation in the field really depends on the culture and the quality of its citizens’ education,” expressed Amin.

Regarding these cultural obstacles, Amin said that the concept of CCRL is increasingly important to sow into the community, especially through the education sector. CCRL is based on three competencies, that is, personal competence to understand one’s own religion in relation to people who are different from oneself, comparative competence to understand other religions in order to establish tolerance and empathy, and collaborative competence, which is working together to overcome various challenges in an increasingly complex world. 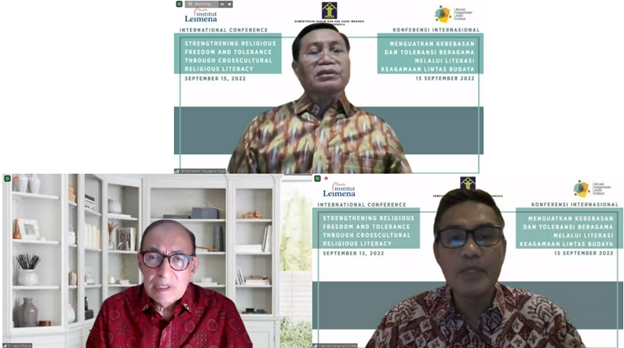 Founder and President of Hardwired Global, Tina Ramirez, provided practical examples of building pluralism in conflict areas such as Iraq, Lebanon, North Sudan, Nigeria, and several other Middle East countries. Tina recounted the situation in Iraq where the presence of ISIS had caused deep trauma to the local community. According to her, children were taught to hate people who accept or believe in a different Islam school of thought. In fact, the citizens experienced terrible intimidation with the incidence of dead bodies left hanging in Mosul, one of the cities in Iraq.

“Since the defeat of ISIS, many have been trying to get rid of the hatred that ISIS had left behind and how to rebuild communities that can live side by side peacefully. This is a difficult situation,” Tina stated.

Tina said her organization is currently receiving support from the government and the local community to create a model for teaching pluralism and human rights in classrooms. The project being developed at the moment is The Peaceful Garden, where children are invited to plant flower seeds to build a new garden.

“This is what happened in Iraq. Even though they have been destroyed, I say, you (the children) can help in creating a new society. Children plant their seeds while understanding the importance of sowing new values,” Tina expressed.

Vice President of the G20 Interfaith Association, Katherine Marshall, said that Indonesia’s leadership in the G20 is in the spotlight. The Covid-19 pandemic situation has caused the world today to face various crises including economic, religious tensions, threats of nuclear war, and peace crises. “This is a time where Indonesia has an important leadership role in the G20 presidency,” she said.

President of Love Your Neighbor Community, Wade Kusack, shared his experience in implementing the CCRL program in Kazakhstan. “The implementation of CCRL has given tangible results in Kazakhstan. For instance, the Spiritual Board of Muslims in Kazakhstan and the Association of Evangelical Churches have agreed to work together. Last week, they even worked together to conduct a conference on religion and rule of law for law enforcers and officials,” he stated.

Head of Education and Training at the Istiqlal Mosque, Faried F Saenong, said that the CCRL program in Indonesia has been operating since 2021, attended by around 2,500 madrasa and Islamic boarding school teachers through online training. A small number of teachers have also attended face-to-face workshops in designing classroom lesson plans.

Executive Director of The Sanneh Institute, John Azumah, stated that Africa is a diverse continent with a 50:50 religious composition of Islam and Christianity. However, the situation of intellectual and theological dialogue is so weak that it has given rise to a number of conflicts, such as those in Rwanda and Nigeria. “That’s where CCRL becomes very important for us in Africa,” he said.