Indonesia as a Laboratory for Pluralistic Living 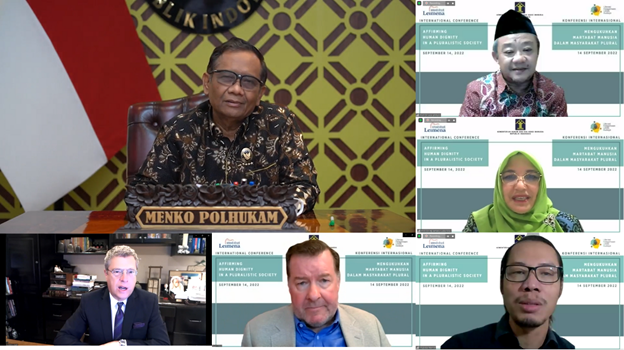 Indonesian Coordinating Minister for Political, Legal and Security Affairs, Mahfud MD (top left) as keynote speaker with all the speakers on the second day of the International Virtual Conference on Wednesday, Sept 14, 2022.

Jakarta – Indonesian Coordinating Minister for Political, Legal and Security Affairs, Mahfud MD, said that Indonesia has become a laboratory for pluralistic living. This is because, as a matter of fact, Indonesia arose from a society that is very diverse in terms of religion, ethnicity/race, as well as language.

This was conveyed by Mahfud who was the keynote speaker on the second day of the International Virtual Conference with the theme “Religious Freedom, Rule of Law, and Cross Cultural Religious Literacy” which was conducted by the Indonesian Ministry of Law and Human Rights and Leimena Institute, Wednesday (Sept, 14) night.

Mahfud stated that Indonesia’s diversity makes it very susceptible to arousing division. This situation had already been discerned by the founding fathers of the nation who then agreed to unite through the Youth Pledge on October 28, 1928. Indonesia, which has more than 1,000 ethnic groups, 700 languages, and adherents of various religions/beliefs, expressed that they were united in building an independent country called Indonesia.

“The world can learn from Indonesia as a laboratory for pluralism, how to place ideology, constitution, religion, and rule of law in order to maintain human honor and dignity that is given by The One Supreme God,” Mahfud said to nearly 2,000 people who attended via Zoom.

Mahfud explained that Indonesia established Pancasila as the nation’s philosophy and the source of all its laws in order to nurture the nation’s diversity. Pancasila must be the basis for determining national laws and politics. All legal products in Indonesia must also be based on and uphold Pancasila.

“Pancasila is the fundamental essence of the constitution which is the highest source of law, which then determines the content of the lower legal products as well as the measurement of the validity of a norm in the said legal product. It means that Pancasila begets laws,” Mahfud continued.

Second, the created laws must protect democracy and nomocracy. Democracy means that the law must reflect the aspirations of the people (sovereignty of the people), while nomocracy means that the law must uphold truth (sovereignty of the law). “Democracy in order to claim victory, nomocracy in order to claim truth. The meeting point between seeking victory and truth is the State of Pancasila,” Mahfud said.

Third, the law must promote the creation of social justice by narrowing the inequality gap among its citizens, which is reflected in the Gini index/ratio among others. The Coordinating Minister stated that the Gini index shows the level of inequality with regards to Indonesian spending. Inequality worsens if the Gini index becomes wider; for instance, at the beginning of the Reformation, Indonesia’s Gini index was recorded at 0.410 but has now been suppressed to 0.384. 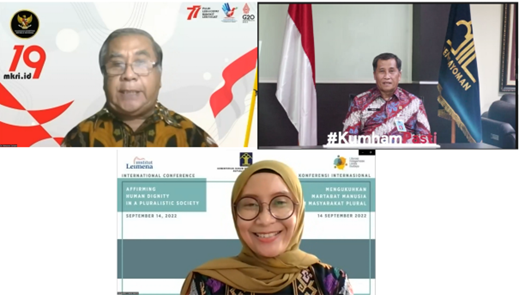 Secretary General of Muhammadiyah Central Board, Abdul Mu’ti, conveyed the concept of Pluralistic Islamic Religious Education whose principles can be applied to religious education in general.

“In my opinion, religion cannot be quantified, such as the number of students as an administrative requirement for conducting religious education. We must be able to provide inclusive religious education services for all students of any religion,” Mu’ti said.

Chair of Women, Youth and Family Affairs of the Indonesian Ulama Council, Amany Lubis, stated that women need to transform in order to strengthen human dignity in the life of a pluralistic society.

In line with that, Executive Director of the Wahid Foundation, Mujtaba Hamdi, expressed that Indonesia has a lot of homework before it can become a country that is in accordance with the Pancasila philosophy. According to her, there needs to be improvements in the education sector in terms of its system, actors namely teachers and students, as well as the enculturation of tolerance in the classroom.

Rex E. Lee Chair and Professor of Law at Brigham Young University, Brett G. Scharffs, said that human dignity is a fundamental concept of human rights. The drafters of the United Nations’ Universal Declaration of Human Rights (UDHR) from 18 countries focused on human dignity in the process of identifying, detailing, and articulating the 30 short articles that would form the final text of the UDHR.

Senior Research Fellow at the University of Washington, Chris Seiple, conveyed the concept of covenantal pluralism which is a commitment to relate, respect, and protect others, regardless of their beliefs or the behaviors that arise from them, whether we agree or not. “Positive pluralism is pluralism that covenants, namely a moral promise to engage with different parties and respect them,” Seiple stated.

← Minister of Law and Human Rights: Religious Freedom in Indonesia is Absolute and Cannot Be Violated The Concept of Cross-Cultural Religious Literacy is Fitting for a Multicultural Indonesia →
Go to mobile version