Minister of Law and Human Rights: Religious Freedom in Indonesia is Absolute and Cannot Be Violated 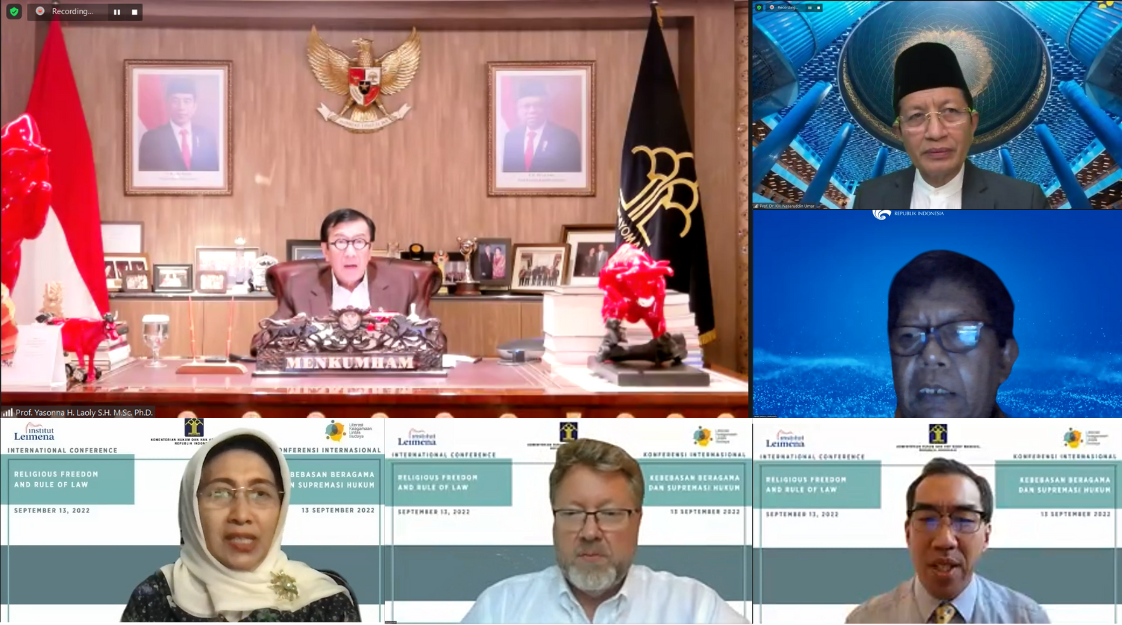 Jakarta – Ministry of Law and Human Rights of the Republic of Indonesia and Leimena Institute held the International Virtual Conference with the theme “Religious Freedom, Rule of Law, and Cross-Cultural Religious Literacy” for three consecutive days on 13-15 September 2022.  Indonesian Minister of Law and Human Rights, Prof. Yasonna H Laoly, who was the keynote speaker on the first day, stated that religious freedom in Indonesia is an absolute right and is included as a non-derogable right, one that cannot be violated as a fundamental human right. However, the Minister acknowledged that religious freedom continues to face challenges when it is regarded as an exclusive right by a certain group of people.

“Religious freedom in itself is an absolute right and falls under the category of forum internum, and is an embodiment of inner freedom (freedom to be) and is therefore included as a non-derogable right, one that cannot be violated as a fundamental human right as stated in Article 18 of the Universal Declaration of Human Rights,” said Yasonna in a conference via zoom which was attended by around 3,000 people, Tuesday night (Sept, 13).

“We also face challenges when the right to freedom of religion is made an exclusive right that can only be enjoyed by a certain group of people, without respecting the rights of others to embrace a different religion and belief,” Yasonna stated.

This situation, he said, requires comprehensive handling by involving all stakeholders based on different religions and beliefs. “This is where the law and the rule of law play an important role in maintaining public order and regulating religious life and freedom in Indonesia,” explained Yasonna. 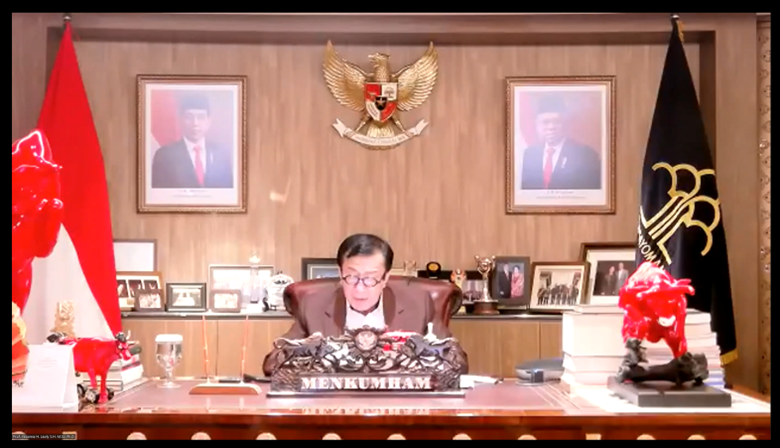 Yasonna emphasized that Indonesia is a nation of laws inspired by Pancasila so that the guarantee of protection is not only given to people but also to religion itself. In addition, although the majority of the population’s religion is Islam, Indonesia does not enforce Islamic Law (Syariah Law) nationally because it has inherited its civil laws from the Netherlands, and in some cases enforces customary laws and religious laws for the Muslim population.

“As a country that adheres to the principle of the rule of law, the resolution of problems regarding the religious life of certain groups must be resolved by the State by implementing the right laws, not by taking vigilante acts as was done by certain organizations in the past. If there is a problem, report it; do not take action on your own,” the Minister stated.

Yasonna declared that the guarantee of religious freedom in Indonesia is regulated through national laws, including Articles 28E, 28J, and 29 of the 1945 Constitution and Article 22 of Law Number 39 of 1999 concerning Human Rights. According to him, religious people must prioritize the appreciation of diversity/plurality in order to attain a sense of civilized humanity (2nd precept) and to treat fellow humans justly (5th precept), and for the unity of Indonesia (3rd precept).

“It is inhumane if there is some violence or crime that are aimed at imposing religion on people, because what we call religion is faith that is believed by each and every person,” he continued.

Religion as Embodiment of Human Rights

Meanwhile, the Grand Imam of the Istiqlal Mosque, Prof. Nasaruddin Umar, said that everyone should realize that religion is the highest embodiment of human rights. Because of this, there should be no coercion in religion, let alone acts of violence. “If there is a religious interpretation that justifies all forms of violence, it must be rejected, because religion, especially the Islam that I know, will never tolerate violence itself,” Nasaruddin said.

In the context of the relations between state and religion, Nasaruddin opined that the state should not arbitrarily intervene in an excessive manner; in the same way, religion should not violate the rules of the State that have been agreed upon. “This is the function of Pancasila which regulates the social distance between religious and state territories,” he stated.

Senior Advisor of the Executive Office of the Presidential Staff, Prof. Siti Ruhaini Dzuhayatin, said that Indonesia has, in fact, experienced two Proclamations. The first Proclamation on October 28, 1928 (Youth Pledge) was the starting point in transforming the identity of the Indonesian nation from an ethno-religious communality to a modern nation society with the values of openness, inclusiveness, and egalitarianism. These ideals were then adopted when the Indonesian state was founded in the second Proclamation on August 17, 1945.

“With the modern state agreement, the state was created based on the rule of law so that it can still protect the freedom of expression including religion in a balanced way,” Ruhaini expressed.

Secretary of Directorate General of Informatics Applications under the Indonesian Ministry of Communication and Informatics, Slamet Santoso, explained that it was important for society to have a healthy digital culture, including the freedom to believe and express religion positively, as well as the duty to respect other people’s religions.

IRF has been advancing interfaith cooperation for 12 years by prioritizing cooperative engagement and building rooms for informal discussions led by civil society. Meanwhile, IGE, based in Washington DC since 2000, has been actively conducting programs to foster respect for diversity and differences in Vietnam, Uzbekistan, Myanmar, Laos, and China.

Executive Director of Leimena Institute, Matius Ho, stated that religious freedom within the framework of the rule of law means that on the one hand, freedom of religion is a right protected by the Indonesian Constitution, the 1945 Constitution, and various international legal instruments. On the other hand, freedom of religion is the responsibility of the government along with all its citizens, which must be carried out with a sense of commitment and respect for others, especially to those of a different religion from us. (IL/Chr)